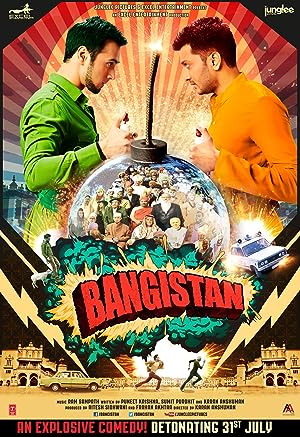 How to Watch Bangistan 2015 Online in Australia

Bangistan is a whip smart and uproarious satire on fundamentalism and the story of two unlikely terrorists, the antitheses of each other, with a common destructive goal. Concerned by the unrest in the name of religion, Subcontinental leaders of Muslims and Hindus, the Imam and the Shankaracharya, announce that they're attending the International Peace Conference in Krakow in a joint effort to help unite the two religions in perpetual harmony. Rival rabble-rousing ragtag organizations, the Islamist Al-Kaam Tamam and right-wing political party Maa Ka Dal separately recruit and brainwash Hafeez and Praveen to suicide bomb the conference so that they may continue to wield their local influence. After a rigorous, and hilarious, 'training' period the two men switch their religious identities to stay under the radar. Hafeez, the jihadi, masquerades as a conservative Hindu, Ishwarchand; while Praveen, the Hindu soldier, dons the garb of a practicing Muslim, Allahrakha. Focused on the mission, they reach Krakow and end up staying together in the same apartment. The two men go great lengths to protect their real identities from the world and each other as they acquire bombs and plan their mission, teetering on the edge of revelation at key moments. Their adventures involve a local cop on their scent and desperate to make a name for himself, the foxy pub owner who takes the two under her wings, a Bangladeshi fixer out to make a quick buck, the assortment of locals they meet, and the cultural impact of their exotic experiences in the city thrown into the mix. A series of serendipitous comic events ends in an epic, dramatic, finale that brings the world to Krakow and covers the range of emotions, leaving you breathless while sending across a universally affirmative message that all religions are but different doorways to the same destination.