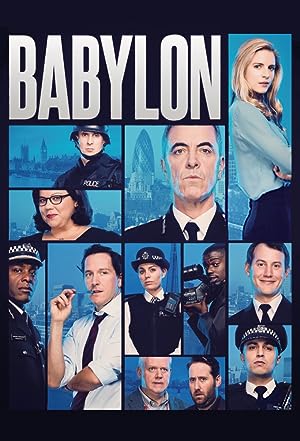 How to Watch Babylon Online in Australia

What is Babylon about?

American PR consultant Liz Garvey is hired by Metropolitan chief constable Richard Miller to help the police force improve its image. At the same time documentary film maker Matt Coward is shadowing Territorial Support Group officers Davina, Robbie and Clarkey as they arrive at a not very well-organized Kurdish protest march where Robbie has to remember he is being filmed and tone down the abuse. Elsewhere Officer Warwick accidentally apprehends an innocent mother whom he has erroneously suspected of being a drug addict. Liz's introductory speech is interrupted by news that a sniper is randomly shooting people around the capital and her disgruntled assistant Finn, annoyed at being passed over for promotion, deliberately makes her look stupid at a press conference by withholding information - as a result of which he is almost sacked. Liz discovers that the sniper is an embittered divorcee who is posting messages on Twitter, from which she locates where he is hiding. The TSG dump Matt to join the stake-out team, who defy Miller by raiding the house, Warwick taking out the sniper. However the success of the exercise is due more to luck than design, a fact about which Liz and Miller decide to keep quiet.

Where to watch Babylon

Which streaming providers can you watch Babylon on

Here is the comprehensive list of streaming providers that will show Babylon in Australia. If Babylon will appear with other providers further down the line, this table will be updated.

The cast of Babylon

Babylon is a great Comedy movie, we’ve selected several other movie options that we think you would like to stream if you have watched Babylon

Babylon is a great comedy show, we’ve selected several other show options that we think you would like to stream if you have watched Babylon