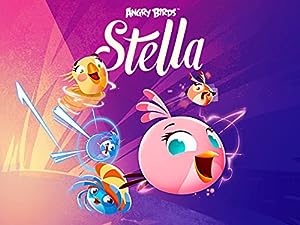 How to Watch Angry Birds Stella Online in Australia

What is Angry Birds Stella about?

Stella - the fierce and feisty bird from Angry Birds - joins her best friends Dahlia, Poppy, Willow and Luca for some fun new adventures! Together they explore, create, rock out and laugh...a lot! But just like in any friendship, strong personalities can sometimes clash. The important thing is that they always make up in the end...or do they? Gale is Stella's former best friend who flies down a darker path. She soon earns the nickname Bad Princess as she becomes power-hungry and obsessed with finding the mysterious Golden Egg - no matter what! Part of her wants to re-unite with her friends but she's blinded by pride, power and greed. She just needs to rediscover what's most important! Gale may have a shiny crown, but she's lost something much more precious...Stella and her other friends.

Where to watch Angry Birds Stella

Which streaming providers can you watch Angry Birds Stella on

The cast of Angry Birds Stella