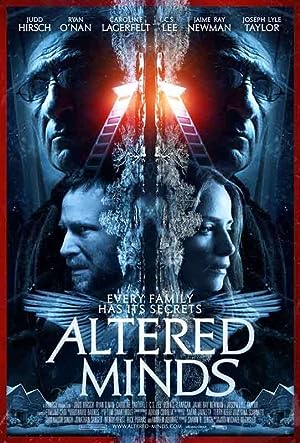 How to Watch Altered Minds 2013 Online in Australia

The cast of Altered Minds

What is Altered Minds about?

The Red Robin is a tense psychological thriller unveiling the troubled past, conflict-filled present, and uncertain future of a remarkable family, the Shellners. 75 year-old Dr. Nathaniel Shellner's led an extraordinary life as a psychiatrist working with traumatized patients fleeing war zones, earning himself a Nobel Prize for his work. After having one child, Leonard (48), with his wife, Lillian (72), the Shellners elected to adopt the remainder of their family from the camps where Dr. Shellner worked. Ultimately the Shellners incorporated five children from all over the world into their family - Tommy (36), Julie (38), and Harry (37) As Dr. Shellner lies on his death bed on a frigid, icy day on the fringes of New York City in suburban New Jersey, the family convenes at the house where the couple raised the children for a final, bittersweet farewell to a sensational and inspiring public figure. Or, that's the idea until all hell breaks loose after Tommy arrives and accuses his father of adopting his children not out of concern for their future well-being, but to use them for some warped psychological experiment. The proceedings from Tommy's accusation forward during the remainder of the evening offer a cocktail of incidents between the family members own interpersonal issues and a relentless exploration of the clues Tommie manufactures as evidence of his father's alleged wrong-doing. The allegations not only stun the family, they stir up anger and resentment not only because of Dr. Shellner's failing health, but also because he has been held up as a paragon of selflessness and virtue not only within the family but from all his public recognition. As Tommy relentlessly pursues his own 'evidence' of his father's ostensible experiments, he simultaneously stirs up a whole load of simmering resentments, shifting alliances, and old traumas from the family's internal relations and dynamics. Though initially dismissed as disturbed and traumatized, Tommy's determination opens up doors to his father's past that may, in fact, cast a shadow on his father's credibility and character.

Where to watch Altered Minds