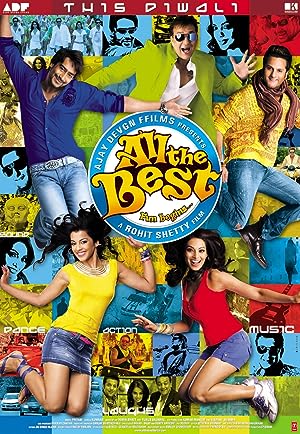 How to Watch All the Best: Fun Begins 2009 Online in Australia

The cast of All the Best: Fun Begins

What is All the Best: Fun Begins about?

Veer Kapoor lives in a palatial bungalow in Goa along with his girlfriend, Vidya, and a maid, Mary. Every month he gets an allowance of Rs. 1 Lakh from his NRI brother, Dharam, which he uses to fund his band, as well as the dilapidated Gym of his friends, Prem and Jhanvi Chopra. Veer's life undergoes many hilarious changes after he decides to borrow money from a gangster called Tobu in order to bet on his friend, Prem, taking part in a car race. After Tobu applies pressure, Veer desperately rents the bungalow to a Zee Super Lottery Winner, Raghuvandas Goverdhandas Vakawale - but even more chaos and complications arise with the unexpected arrival of Dharam.

Where to watch All the Best: Fun Begins

More Action movies like All the Best: Fun Begins

More Action tv shows like All the Best: Fun Begins