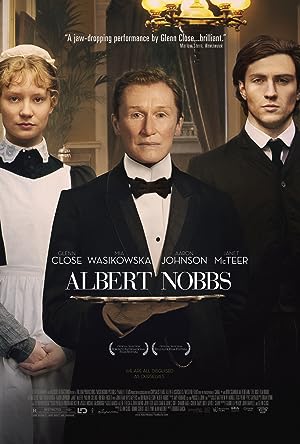 How to Watch Albert Nobbs 2011 Online in Australia

The cast of Albert Nobbs

What is Albert Nobbs about?

In 19th century Dublin, Albert Nobbs, an eccentric man in the latter part of middle age, works as a waiter in Morrison's Hotel run by the stingy and controlling Marge Baker. Albert is hard working and saves his money so that one day he will be able to eke out a better life for himself by owning his own business rather than work at the hotel. Beyond his work colleagues, he is all alone in the world. One day, a man named Hubert Page is hired by Mrs. Baker to paint one of the rooms in the hotel. She forces Hubert to share Albert's bed for the one night he is required to stay to complete the work, much to Albert's horror. Hubert discovers the reason Albert did not want to share a room with him. But rather than the issue being a problem, Hubert shows Albert that he can follow a slightly different life path than the one he envisioned for himself - one closer to the life that Hubert leads with his wife Cathleen - which includes getting married and having a wife to support him emotionally. Albert's choice as a bride is his younger flirtatious co-worker Helen Dawes, who, unknown to Albert, is already in a sexual relationship with the brusque and sly Joe Mackins, another co-worker recently arrived to Morrison's. As Albert, Helen and Joe play their respective games of courtship, Albert may find that what seemed to come naturally to Hubert may be more difficult for him.

Where to watch Albert Nobbs