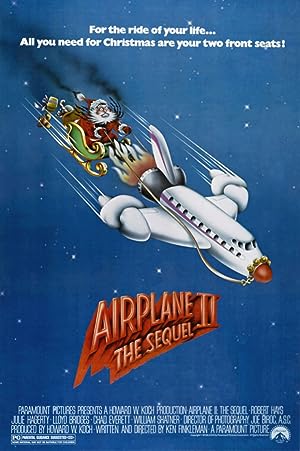 How to Watch Airplane II: The Sequel 1982 Online in Australia

The cast of Airplane II: The Sequel

What is Airplane II: The Sequel about?

Years have passed since Ted Striker heroically saved many lives by avoiding a plane crash. Working as a test pilot for a new Lunar Shuttle, he gets innocently sent into a mental ward after a crash of the badly constructed, computer-navigated spaceship. When he hears that the exactly same type of shuttle is scheduled for a moon flight soon, he breaks out to hinder the launch. Aboard, Ted finds his ex-ex Elaine Dickinson working as stewardess again and her fiancé Simon, a member of the committee that wants the Mayflower I to be launched. In flight, the ship's computer ROK 9000 takes control, killing the crew. Ted and Elaine manage to switch it off, and now it is up to Ted again to save the passengers' lives - if there only wouldn't be these flashbacks to the war and these people who know Ted and have no faith in his abilities at all.

Where to watch Airplane II: The Sequel