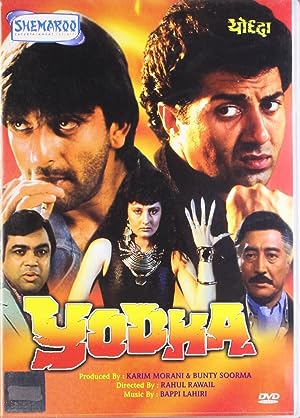 How to Watch Yodha 1991 Online in Australia

The cast of Yodha

What is Yodha about?

Karan (Sunny Deol) a lawyer crusades for truth, fairness and justice, is the son of Chandrakant (Shafi Inamdar) a journalist who uses his journalistic expertise to expose and unmask Justice Dharmesh Agnihotri, who is known as 'Daga' in the underworld. Suraj (Sanjay Dutt) is a man victimized by Fate. To bear the loss of his love, Shilpa he gets addicted to drugs. Then in a complete reversal of attitude he turns against drug dealers. He vows to bring an end to the deadly drug smuggling which wreaks such havoc in people's lives. Dharmesh Agnihotri's daughter Vidya loves Karan. Karan idolizes Justice Dharmesh Agnihotri, unaware of the man behind the mask of respectability. Daga hires Suraj and deliberately creates animosity between Suraj and Karan The enmity between Suraj and Karan is sealed when Karan's father Chandrakant is framed for murder and sent to jail where he is killed. Karan loses complete faith in the judicial system. Will Suraj and Karan discover the truth behind the events and incidents happening around them?

Where to watch Yodha