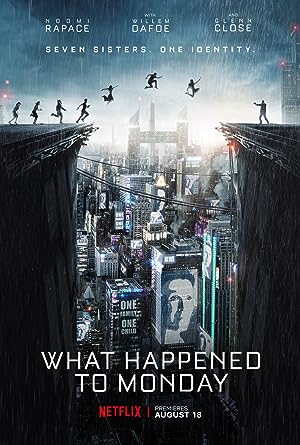 How to Watch What Happened to Monday 2017 Online in Australia

What is What Happened to Monday about?

In a not so distant future, where overpopulation and famine have forced governments to undertake a drastic One-Child Policy, seven identical sisters (all of them portrayed by Noomi Rapace) live a hide-and-seek existence pursued by the Child Allocation Bureau. The Bureau, directed by the fierce Nicolette Cayman (Glenn Close), enforces a strict family-planning agenda that the sisters outwit by taking turns assuming the identity of one person: Karen Settman. Taught by their grandfather (Willem Dafoe) who raised and named them - Monday, Tuesday, Wednesday, Thursday, Friday, Saturday and Sunday - each can go outside once a week as their common identity, but are only free to be themselves in the prison of their own apartment. That is until, one day, Monday does not come home.

Where to watch What Happened to Monday

Which streaming providers can you watch What Happened to Monday on

What Happened to Monday - Preview

It's 2043 in a dystopian and overpopulated world where families are limited to just one child. But what happens when septuplets arrive? This is the narrative explored in What Happened to Monday, a Netflix original directed by Tommy Wirkola. Our seven heroines must battle to evade a government which wants to put them all into a ‘long sleep’, by disguising themselves as one person - with the help of their grandfather, Terrance Settman (Willem Dafoe).

The cast of What Happened to Monday

What Happened to Monday Trailer

More action tv shows like What Happened to Monday

Watch What Happened to Monday