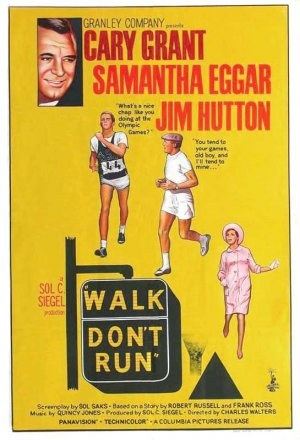 How to Watch Walk Don't Run 1966 Online in Australia

The cast of Walk Don't Run

What is Walk Don't Run about?

British industrialist Sir William Rutland - "Bill" to his friends - is in Tokyo on a business trip during the time of the Summer Olympic Games there in 1964. Having actually arrived in Tokyo two days before his original planned arrival, he has problems finding a hotel room because of the Olympics. Spotting an ad posted on a British Embassy message board of a room available to sublet, Bill is able to wrangle his way into the apartment of Christine Easton, who is renting out the sitting room of her one-bedroom apartment as a bedroom for the duration of the Olympics. Bill's short-term living situation in Christine's sitting room is despite her solely wanting a female roommate. Soon thereafter, Bill meets Steve Davis, an athlete with the American Olympic team who seems to be reluctant to disclose in which event he is competing. Like Bill, Steve has arrived in Tokyo two days early of his scheduled arrival, has nowhere to stay for those two days, and without Christine's knowledge also wrangles his way into Christine's flat to share her sitting room with Bill as Bill sublets half of the sitting room to Steve. Christine is reluctant to tell anyone of her new roommates because of the perceived impropriety. Those not in the know include her fiancé of twenty-two months, Julius D. Haversack, the Second Secretary to the Minister of Protocol at the British Embassy. Bill, who has met Mr. Haversack, considers him to be officious and obnoxious. Despite Christine being in a relationship with Mr. Haversack, she and Steve gradually fall for each other. Seeing what is happening between Christine and Steve, Bill does whatever he can to push the two together and to get Mr. Haversack out of the way. When the truth comes out about the roommate situation, Bill sees a different opportunity for Christine and Steve's joint happiness.

Where to watch Walk Don't Run