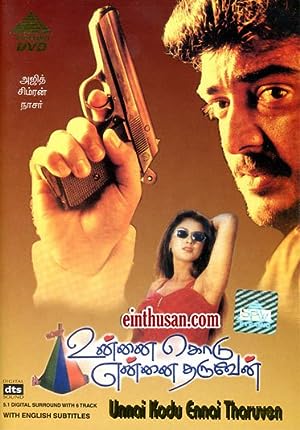 How to Watch Unnai Kodu Ennai Tharuven 2000 Online in Australia

What is Unnai Kodu Ennai Tharuven about?

Surya (Ajith) is abandoned by his mother and handed over by her to a Brigadier in the army for reasons the audience is not aware. The Brigadier raises him to be a model patriotic recruit in the army. When Indu (Simran)arrives with her father, a high ranking army officer, and mother, Surya is assigned to show them around town. Surya and Indu fall in love and her parents agree to the marriage. However Indu's father dies in a terrorist attack and her mother dies of the shock. Indu now wants Surya to leave the army and he must make a choice.