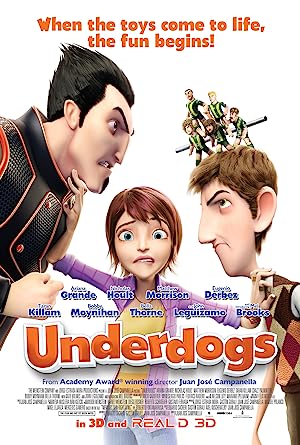 How to Watch Underdogs 2013 Online in Australia

The cast of Underdogs

What is Underdogs about?

In the small village where Amadeo lives there is no one good enough to challenge his skills at Table Football. But, while Amadeo may be a genius as a table football player in real life he's a loser. He's in love with Lara, his childhood friend, but he's so shy that he can't bring himself to confess his love for her. So he just hangs out in his quaint, timeless village. When Amadeo beats the village bully Flash at Table Football. The scene is set for an epic rivalry. Consumed with anger Flash vows to get even and 10 years later he returns as an International Superstar, a Football Icon and Galatico determined to wreak his revenge. He demolishes the village to build a Football Academy. He destroys the table football table and takes away Amadeo's girl friend the lovely Lara in his chopper. Amadeo is distraught and when one of his tears falls on Skip the captain of the Table Football Players he comes to life and together with other key football players, Rico and Loco, they persuade Amadeo to fight back against the psychotic Flash and his manipulative henchman The Agent. When after a series of roller coaster adventures the two rivals finally face each other they must settle their old score. But this time it won't be on a football table; it will be in a real football stadium. Flash's team of International superstars line up against a village team recruited, with Lara's help, from the odd balls who live in the village. They may not be any good at football but they are playing for their livelihoods and the life of the village. In an epic mis-match in which Amadeo's honor and the future of the village are at stake. There seems to be only one possible winner. But this is football and anything can happen; not only will Amadeo and his village football team find a depth of commitment but, his beloved table football players share his passion, and together they make the impossible seem possible.

Where to watch Underdogs