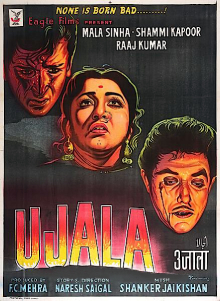 How to Watch Ujala 1959 Online in Australia

The cast of Ujala

What is Ujala about?

Bombay-based Ramu lives an impoverished lifestyle in a Chawl in Parel along with his widowed mother; sister Sandhya; & three much younger siblings, and makes a living using a wooden pushcart. One day his sister, Munni, is run over by a car, gets hospitalized and passes away. Unable to obtain wood for her cremation, he uses his pushcart, and then joins hands with a Chembur-based gangster, Kalu, and picks pockets. He is able to get some money to feed the family as well as pay for Sandhya's engagement. He then gets into an altercation with one of his associates, Chandu, and the latter gets killed. Guilt-ridden he decides to give up on crime and gets a job sharpening knives. It is is here he will be plagued by the arrival of the police who are investigating Chandu's death - as well as become a suspect when a silver knife goes missing.

Where to watch Ujala