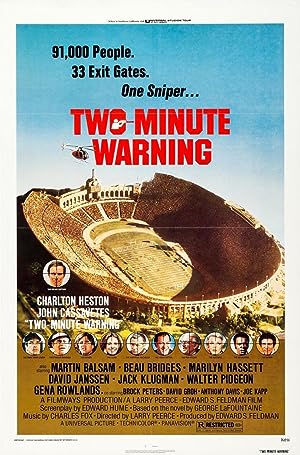 How to Watch Two-Minute Warning 1976 Online in Australia

The cast of Two-Minute Warning

What is Two-Minute Warning about?

A psychotic sniper plans a massive killing spree in a Los Angeles football stadium during a major championship game. The police, led by Captain Peter Holly (Charlton Heston) and SWAT commander Sergeant Button (John Cassavetes), learn of the plot and rush to the scene. Still, they may be too late, as an all-star cast finds itself lined up in the sights of a gun-toting madman.

Where to watch Two-Minute Warning