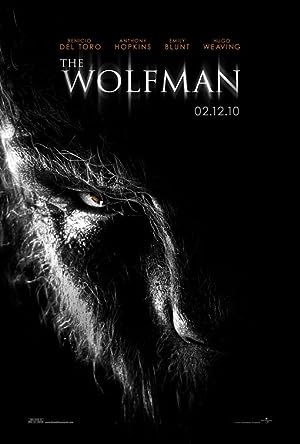 How to Watch The Wolfman 2010 Online in Australia

What is The Wolfman about?

Lawrence Talbot's childhood ended the night his mother died. His father sent him from the sleepy Victorian hamlet of Blackmoor to an insane asylum, then he goes to America. When his brother's fiancée, Gwen Conliffe, tracks him down to help find her missing love, Talbot returns to his father's estate to learn that his brother's mauled body has been found. Reunited with his estranged father, Lawrence sets out to find his brother's killer... and discovers a horrifying destiny for himself. Someone or something with brute strength and insatiable blood lust has been killing the villagers, and a suspicious Scotland Yard inspector named Aberline comes to investigate.

Where to watch The Wolfman

Which streaming providers can you watch The Wolfman on

Here is the comprehensive list of streaming providers that will show The Wolfman in Australia. If The Wolfman will appear with other providers further down the line, this table will be updated.

The cast of The Wolfman

The Wolfman is a great Drama movie, we’ve selected several other movie options that we think you would like to stream if you have watched The Wolfman

The Wolfman is a great drama show, we’ve selected several other show options that we think you would like to stream if you have watched The Wolfman