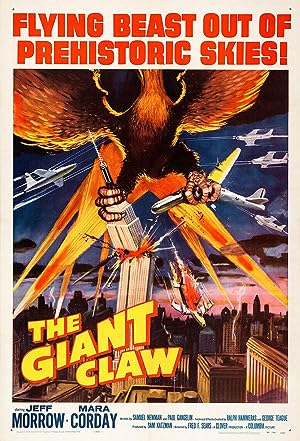 How to Watch The Giant Claw 1957 Online in Australia

Where to watch The Giant Claw

What is The Giant Claw about?

When electronics engineer Mitch MacAfee spots a UFO as "big as a battleship," from his plane, the Air Force scrambles planes to investigate. However, nothing shows up on radar, and one of the jets is lost during the action. MacAfee is regarded as a dangerous crackpot until other incidents and disappearances convince the authorities that the threat is real. Some believe it is a French-Canadian folk legend come to life, but it turns out to be an extraterrestrial giant bird composed of anti-matter whose disregard for human life and architecture threatens the world.

Which streaming providers can you watch The Giant Claw on

Here is the comprehensive list of streaming providers that will show The Giant Claw in Australia. If The Giant Claw will appear with other providers further down the line, this table will be updated.

The cast of The Giant Claw