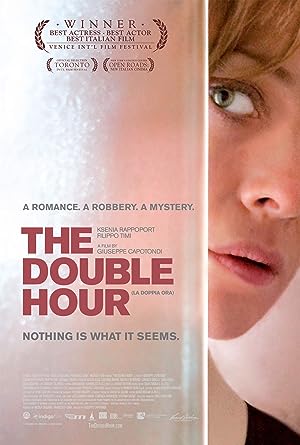 How to Watch The Double Hour 2009 Online in Australia

The cast of The Double Hour

What is The Double Hour about?

Guido (Filippo Timi), a former cop, is a luckless veteran of the speed-dating scene in Turin. But, much to his surprise, he meets Slovenian immigrant Sonia (Ksenia Rappoport), a chambermaid at a high-end hotel. The two hit it off, and a passionate romance develops. After they leave the city for a romantic getaway in the country, things suddenly take a dark turn. As Sonia's murky past resurfaces, her reality starts to crumble. Everything in her life begins to change - - questions arise and answers only arrive through a continuous twist and turn of events keeping viewers on edge until the film's final moments. THE DOUBLE HOUR, winner of Best Actress at the 2009 Venice International Film Festival, is directed by Giuseppe Capotondi.

Where to watch The Double Hour