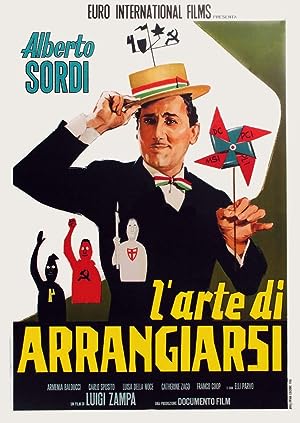 The cast of The Art of Getting Along

What is The Art of Getting Along about?

Rosario Scimoni is twenty years old and lives in Catania at the beginning of this century. He loves two things in life: women and money and he is the secretary of the mayor who is his uncle, and the lover of the mayor's wife, but, unfortunately, he isn't paid for neither of his two jobs. When Rosario falls in love with Paola, partner af a socialist, he becames socialist and let the man of Paola go to jail to have her, but he has no success. When Mussolini and his fascists take the power, Rosario found himself fascist and he marries a women ugly but rich. He becames a gerarca (high fascist authority). When during World War II Sicily is invaded by the allied troops he camouflages himself as communist and at the end of the war he goes to Rome after losing all the money he had. In Rome Rosario changes again his skin and becames a Chistian Democrat after the Christian Democrat's victory in the elections of 1948. Trying to speculate on the land near Rome he ends in prison for five years and in 1953 Rosario closes his career dressed as a German selling faked German gadgets in the streets of Rome.

Where to watch The Art of Getting Along

Watch The Art of Getting Along

More Comedy movies like The Art of Getting Along

More Comedy tv shows like The Art of Getting Along