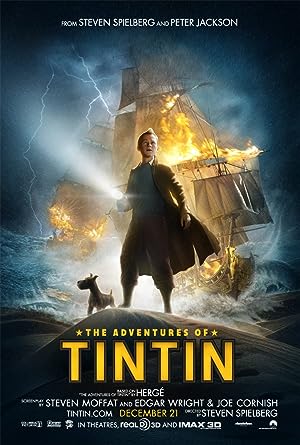 How to Watch The Adventures of Tintin 2011 Online in Australia

The cast of The Adventures of Tintin

What is The Adventures of Tintin about?

Having bought a model ship, the Unicorn, for a pound off a market stall Tintin is initially puzzled that the sinister Mr. Sakharine should be so eager to buy it from him, resorting to murder and kidnapping Tintin - accompanied by his marvellous dog Snowy - to join him and his gang as they sail to Morocco on an old cargo ship. Sakharine has bribed the crew to revolt against the ship's master, drunken Captain Haddock, but Tintin, Snowy and Haddock escape, arriving in Morocco at the court of a sheikh, who also has a model of the Unicorn. Haddock tells Tintin that over three hundred years earlier his ancestor Sir Francis Haddock was forced to scuttle the original Unicorn when attacked by a piratical forebear of Sakharine but he managed to save his treasure and provide clues to its location in three separate scrolls, all of which were secreted in models of the Unicorn. Tintin and Sakharine have one each and the villain intends to use the glass-shattering top Cs of operatic soprano the Milanese Nightingale to secure the third. With aid from bumbling Interpol agents the Thompson Twins our boy hero, his dog and the captain must prevent Sakharine from obtaining all three scrolls to fulfil the prophesy that only the last of the Haddocks can discover the treasure's whereabouts.

Where to watch The Adventures of Tintin

Watch The Adventures of Tintin

More Action tv shows like The Adventures of Tintin