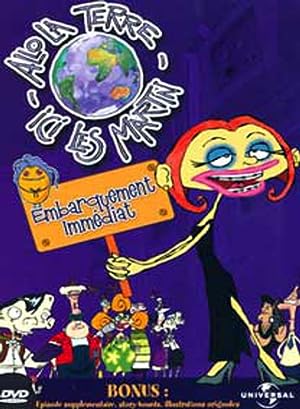 How to Watch Spaced out Online in Australia

What is Spaced out about?

Chosen by Krach Industries as director of their new sub-development, George Martin is in seventh heaven. A new town-house, state of the art technology and a salary to boot! But Krach Industries has taken him for a cosmic ride! The truth is that the Martins are really just guinea pigs, sent off to live on a secret orbital station (S.O.S.!). Yet the Martins are neither rocket scientists nor kamikazes. George is a die-hard optimist and takes his responsibility as leader of the station pretty seriously. But leader of his own pack? His family is quite another story! His wife Monica is looking for an encounter of the third kind... her kind! His son Benjamin is a cosmic super-hero fanatic and his daughter Betty, a manic depressive. Great topics for cocktail chat between Fax and Goodgrief, their cat and dog philosophers!

Where to watch Spaced out

Which streaming providers can you watch Spaced out on

Here is the comprehensive list of streaming providers that will show Spaced out in Australia. If Spaced out will appear with other providers further down the line, this table will be updated.

The cast of Spaced out

Spaced out is a great Animation movie, we’ve selected several other movie options that we think you would like to stream if you have watched Spaced out

Spaced out is a great animation show, we’ve selected several other show options that we think you would like to stream if you have watched Spaced out