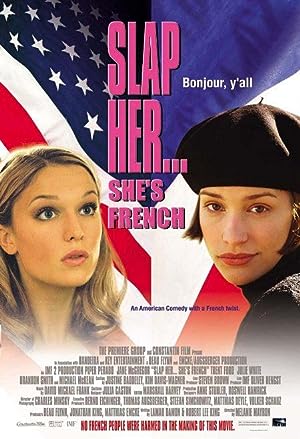 How to Watch Slap Her, She's French! 2002 Online in Australia

The cast of Slap Her, She's French!

What is Slap Her, She's French! about?

A French foreign exchange student, named Genevieve, comes to a small town in Texas to attend a local high school where she shacks up with the school's popular head cheerleader, Starla, and her parents. But Starla soon learns that this French girl is not only smart, attractive, and naive, but quite conniving when Geneviere, with no social life of her own, begins to take over Starla's, starting with stealing the affections her parents, her friends and Starla's boyfriend. When Starla is forced to quit the cheerleading squad after getting some bad grads, Genevieve moves in to take her place. When Starla figures out that Genevieve deliberately set it up by giving her bad tutoring to fail all those classes, she begins an all-out personal war against Genevieve to take back her social life. But Genevieve is anticipating exactly that type of response from Starla and soon turns everyone, including Starla's friends and family, against her by playing the poor victim and making it appear that Starla's the aggressor.

Where to watch Slap Her, She's French!