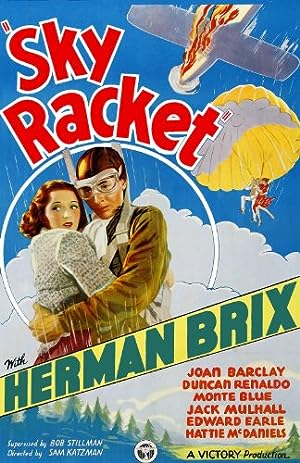 How to Watch Sky Racket 1937 Online in Australia

The cast of Sky Racket

What is Sky Racket about?

Virtually an exact remake of Tim McCoy's 1936 western, "Ghost Patrol", with the difference being that instead of searching for her father held prisoner by the gang, this time the heroine is running from an unwanted suitor. This is not the last time this plot was recycled as a feature or a western. This time the mail planes have cracked up at a spot about twelves miles east of Hardcastle, and the pilots have disappeared along with the mail sacks. G-Man Eric Lane (Bruce Bennett) is assigned to the case. He plans to fly to the scene and bail out, but shortly before he reaches the jump spot he discovers stowaway Marion Bronson (Joan Barclay), who is trying to escape her intended bridegroom Count Barski (Duncan Renaldo) The motor dies and Lane grabs her, and his parachute carries them safely to the ground. They are captured by a gang and taken to the hideout. Lane stalls them by telling them he has kidnapped Marion for the reward money offered by her uncle, Roger Bronson (Henry Roquemore). Lane smooth-talks gang-leader Ben Arnold (Monte Blue)into taking him on as a partner, as he has inside tips and can let him know when a plane has a big haul. Arnold agrees, but won't tell Lane the location of the ray machine that brings down the planes in flight. Lane outwits the gangsters and the G-Men move in and make the capture. Marion decides she'll get married after all...this time to Lane.

Where to watch Sky Racket