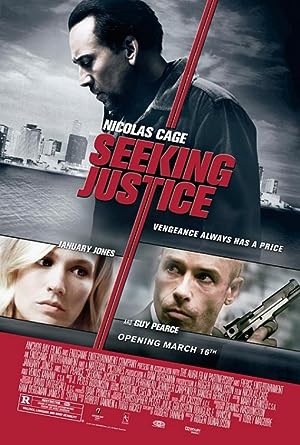 How to Watch Seeking Justice 2011 Online in Australia

The cast of Seeking Justice

What is Seeking Justice about?

In New Orleans, English teacher of the high school Rampart High, Will Gerard, and his wife, musician Laura Gerard, are in love with each other. One night, Laura leaves a rehearsal and is assaulted, while Will is playing chess with his friend Jimmy. Will is visiting her in hospital when, out of the blue, a stranger named Simon tells him that he belongs to an organization of vigilantes and offers to eliminate the assailant. In return, the organisation would want a favor from Will in the future. Will agrees, and the criminal is murdered. Six months later, Simon collects his debt with Will. He demands that Will kill Alan Marsh, a pedophile. Will accidentally kills Alan and soon he learns that the victim was an awarded journalist that was investigating the organization. Now he seeks evidences to prove his innocence but the network of the organization is powerful and is seeking Will out to eliminate him.

Where to watch Seeking Justice