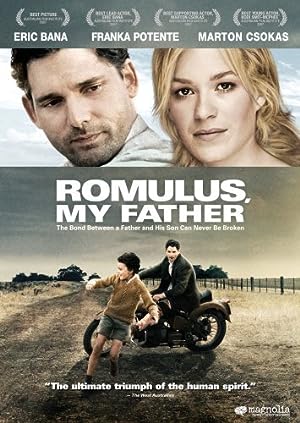 How to Watch Romulus, My Father 2007 Online in Australia

The cast of Romulus, My Father

What is Romulus, My Father about?

Raimond Gaita (1946 - ) comes of age in Frogmore, Victoria in the early 1960s. His parents are immigrants: his Romanian father farms; his German mother, Christina, estranged from Romulus, is in Melbourne. Romulus is near despair when she takes up with the brother of his best friend, who suggests he send for a new wife from back home. For Rai, poverty, bruises, and the mysterious ways of adults compete with his longing for a stable home and his own incipient puberty. Love and madness lie in the same bed. As an old woman tells Rai, "Sometimes what you reckon and what you get ain't the same thing."

Where to watch Romulus, My Father