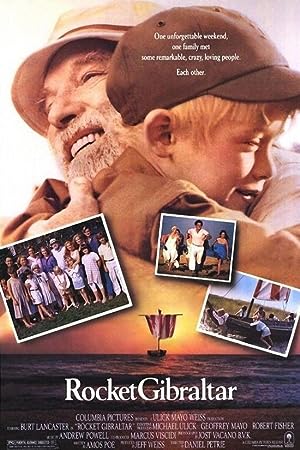 How to Watch Rocket Gibraltar 1988 Online in Australia

The cast of Rocket Gibraltar

What is Rocket Gibraltar about?

On the 77th birthday of the widow patriarch Levi Rockwell, his son and daughters come to his house by the sea with their families to celebrate his birthday. The promiscuous Aggie Rockwell comes alone but soon finds male company. Rose Black comes with her husband Crow Black, who is a baseball player with problems, and their children Cy Blue and Dawn. The workaholic Rolo Rockwell comes with his wife Amanda 'Billi' Rockwell and their children Orson, Kane, Flora and Emily. His daughter Ruby Hanson comes with her husband Dwayne Hanson, who is a comedian, and their children Max and Jessica. During the night, the children are on the beach with their grandfather and they ask him what he would like to receive as a birthday gift. Levi tells that he would like to have a Viking Funeral since the worms eat buried corpses. When Blue sees an abandoned boat on the beach, he suggests his cousins to repair the boat to give to their grandfather for his funeral. Levi and his doctor hide from the family that he has an aneurysm and may die in any moment. When their grandchildren find him dead on his bed, they decide to honor his wish and give a Viking Funeral to him

Where to watch Rocket Gibraltar