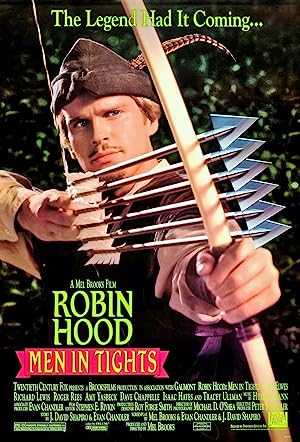 How to Watch Robin Hood: Men in Tights 1993 Online in Australia

The cast of Robin Hood: Men in Tights

What is Robin Hood: Men in Tights about?

Robin of Locksley, known as the most skilled archer of the land, has just returned to England after fighting in the Holy Crusades, where King Richard the Lionhearted is also fighting. Robin finds that much of what he knew of England has gone to ruin, including his longtime family home having been taken away, all at the hands of the evil Prince John, Richard's brother who has assumed the throne in Richard's absence. Neurotic John is basically being controlled by the equally evil Sheriff of Rottingham, everything they doing to fatten their own coffers at the expense of the commoners and peasants. As such, Robin recruits a band of merry men to help him battle Prince John and the Sheriff, they who include: Blinkin, his blind longtime servant; Ahchoo, the misguided son of Asneeze, the man who helped him escape from prison while fighting in the Crusades; Little John, who seems to think that being called Little is only coincidental to the fact of he being a hulking man; and Little John's friend, Will Scarlet O'Hara, a master with daggers. In going to the palace, Robin falls in love at first sight with Marian of Bagelle, a maid of the court. Marian is looking for the man who has the figurative and literal key to unlock her heart (and more private parts). The Sheriff has his own eyes on Marian, he who in turn is the object of desire of Latrine, a powerful hag of a sorceress of the court. Robin and the Sheriff in particular have a fight to the death mentality to achieve their end goals, which for both are protection of the throne for their trusted royal, and the heart and cherry of Maid Marian.

Where to watch Robin Hood: Men in Tights