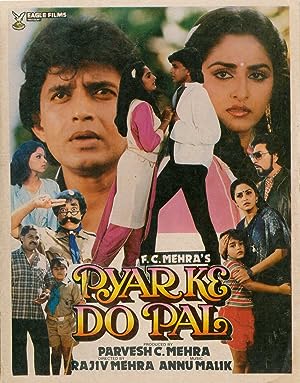 How to Watch Pyar Ke Do Pal 1986 Online in Australia

What is Pyar Ke Do Pal about?

In order to assist her close friend, Rajni Thakur, Geeta Choudhary, has an abortion in her name, so that Rajni can get married. When her secret gets leaked out, Geeta's husband, Ashok, blames her, accuses her of being unfaithful, and drives her out of his house. They have twins, Sunil and Anil, and each parent is allowed custody of one child. The children meet each other at Scout camp, and decide to re-unite their parents, without realizing that they are exposing not only them, but also each other, to danger and death.

Where to watch Pyar Ke Do Pal

Which streaming providers can you watch Pyar Ke Do Pal on

Here is the comprehensive list of streaming providers that will show Pyar Ke Do Pal in Australia. If Pyar Ke Do Pal will appear with other providers further down the line, this table will be updated.

The cast of Pyar Ke Do Pal

Pyar Ke Do Pal is a great Action movie, we’ve selected several other movie options that we think you would like to stream if you have watched Pyar Ke Do Pal

Pyar Ke Do Pal is a great action show, we’ve selected several other show options that we think you would like to stream if you have watched Pyar Ke Do Pal