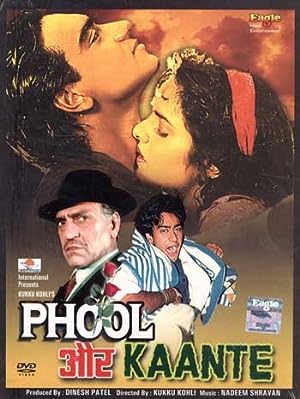 How to Watch Phool Aur Kaante 1991 Online in Australia

What is Phool Aur Kaante about?

Nageshwar is a criminal don and have an only son, Ajay who is quite apprehensive about his dad's criminal empire and wants to shape his own destiny - one that is of peace and love; while Nageshwar wants Ajay to carry on his tradition by taking over from him. When Ajay's young son, Gopal gets abducted by the rival gang headed by Shankar Dhanraj; Ajay and his wife Pooja are forced to re-shape their destinies by leading the path Nageshwar wants them to.

Where to watch Phool Aur Kaante

Which streaming providers can you watch Phool Aur Kaante on

The cast of Phool Aur Kaante

Phool Aur Kaante is a great Action movie, we’ve selected several other movie options that we think you would like to stream if you have watched Phool Aur Kaante

Phool Aur Kaante is a great action show, we’ve selected several other show options that we think you would like to stream if you have watched Phool Aur Kaante