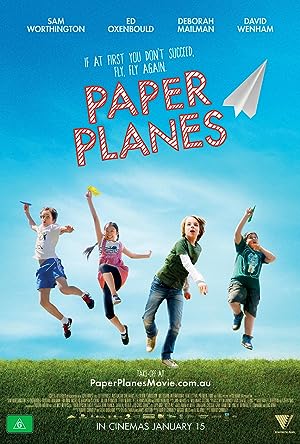 How to Watch Paper Planes 2014 Online in Australia

The cast of Paper Planes

What is Paper Planes about?

On a beautiful sunny morning, Jethro, an uncommon instructor, heads to an elementary school. He is an expert in paper planes, planning to demonstrate the art of paper plane folding to the students and to inform them of the State Competition for the Junior Championship next Sunday. The unexpected introduction to the world of competitive paper plane throwing will excite timid 12-year-old Dylan Weber, forcing him to do his best to beat the 25m qualification point and make it to the Aussie Junior Championships in Sydney. Before long, Dylan will get his ticket to compete, yet, with a father living in the past uninspired and resigned because of his wife's death in a car accident some five months ago, he will have to use his resourcefulness to come up with a winning paper plane model and all the help he can get to make his newfound dream a reality. With the ultimate goal set at the World Junior Paper Plane Championship in Tokyo, talented Dylan not only will he have to gather the sum for such an expensive trip, but to compete against skilful and very ambitious contestants. In the end of this great adventure, Dylan will understand the importance of fighting for what matters in life and that even though winning might be something, never giving up is everything.

Where to watch Paper Planes