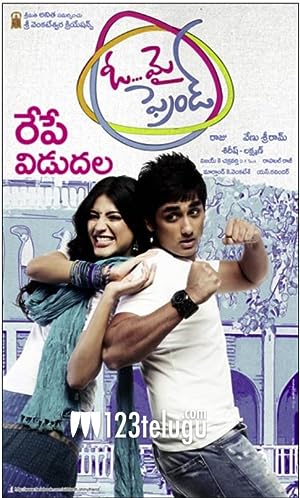 How to Watch Oh My Friend 2011 Online in Australia

The cast of Oh My Friend

What is Oh My Friend about?

Chandu (Siddharth) and Siri Chandana alias Siri (Shruthi Haasan) are buddies. They grew up as unselfish friends like one soul with a single body. All of a sudden, Ritu Sharma (Hansika Motwani), a college friend for both joins their company. Things begin change so fast. Chandu deeply loves Ritu Sharma and successfully proposes her. Siri too has her boyfriend in her heart. Her marriage is fixed with one Uday (Navdeep), a US return. The day comes when the guy from the US arrives in Hyderabad to take the hand of Siri. A situation arises that Uday and Ritu believe that Siri and Chandu are in love with each other. Friendship or love, which wins at last? It would form the crux of the story.

Where to watch Oh My Friend