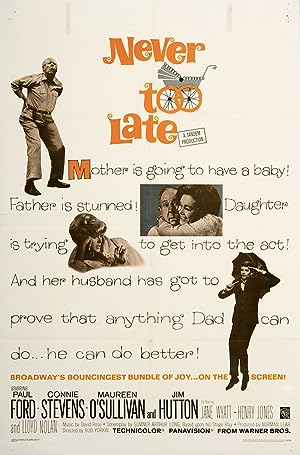 How to Watch Never Too Late 1965 Online in Australia

The cast of Never Too Late

What is Never Too Late about?

Middle-aged Harry lives comfortably with his wife Edith and his daughter and her husband. Though rather sour and a bit mean, he is in fact content. So when Edith finds she is pregnant again he is anything but overjoyed. Apart from the changes it will mean, he is now seen as some sort of older superman in town. Meanwhile his daughter sees child bearing as a way out of the extra housework she is having to do, the achievement of which starts to put pressure on her increasingly tired husband.

Where to watch Never Too Late