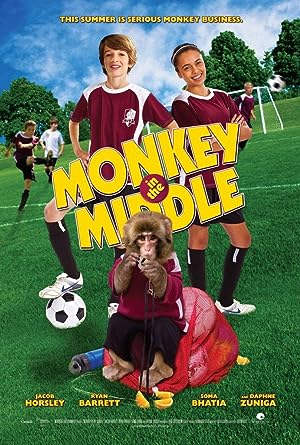 How to Watch Monkey in the Middle 2014 Online in Australia

The cast of Monkey in the Middle

What is Monkey in the Middle about?

Chris has just moved to the East Coast, and already his workaholic father is encouraging him to make new friends. Luckily football (soccer) practice is starting up, and Chris meets a few kids on the team-including his cute neighbor Mara. When Mara invites Chris to help liberate some mistreated animals from the local fair, Chris accepts. They head to the fair that night, but get busted by ringleader Malick, who chases them off the grounds. It isn't until the next morning that Chris realizes Momo, a lovable little monkey, stowed away in his backpack. Not wanting to send Momo back to Malick's greedy clutches, Chris must find a way to keep him out of sight. But handling a monkey does have its perks: Mara is spending a lot of time with Chris, and Momo is even lending Chris a paw on the football field. Chris' summer is bound to have a lot of monkey business, but is it enough to drive him bananas?

Where to watch Monkey in the Middle

More Family tv shows like Monkey in the Middle