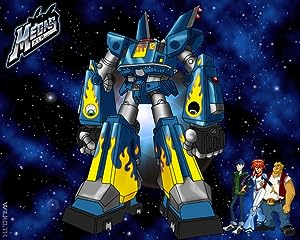 How to Watch Megas XLR Online in Australia

What is Megas XLR about?

In the future, humanity has been beset by a horde of alien invaders. Kiva, a human soldier, has captured an alien mecha, the Megas, and remodeled it, planning to send it back in time three years to a pivotal battle so that the humans can win the war. Her plan goes awry when the Megas is fired upon in transit, rocketing it at random through time. She pursues it, as does the alien mothership. Curtain up on present day. A slob in New Jersey has discovered the Megas in a pile of garbage. Kiva, having caught up to him, is dismayed to learn that it has been remodeled, its head replaced by a classic muscle car, its controls integrated with video game controllers, making her new (and unfortunate) ally, Coop, the only one capable of piloting the Megas. She must now find a way to repair the Megas' time controller and return to the future, as well as dealing with the various challenges inherent in co-owning the Earth's most destructive piece of hardware... especially since Coop insists that it is HIS robot, and seems to be somewhat judgementally impaired.

Where to watch Megas XLR

Which streaming providers can you watch Megas XLR on

Here is the comprehensive list of streaming providers that will show Megas XLR in Australia. If Megas XLR will appear with other providers further down the line, this table will be updated.

The cast of Megas XLR

Megas XLR is a great Action movie, we’ve selected several other movie options that we think you would like to stream if you have watched Megas XLR

Megas XLR is a great action show, we’ve selected several other show options that we think you would like to stream if you have watched Megas XLR