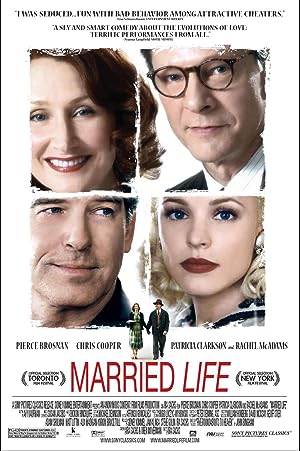 How to Watch Married Life 2007 Online in Australia

The cast of Married Life

What is Married Life about?

The late 1940s. Richard Langley, a bachelor playboy, narrates a story that starts when his best friend, Harry Allen, invites him to lunch to tell Richard he's in love. Trouble is, Harry's already married to Pat; he worries Pat would be hurt too deeply by a divorce. Then, Harry's new love, Kay, joins them. Richard is smitten, so when he finds out that Pat may be in love with someone else but won't tell Harry because she fears he would be too hurt, Richard can't decide if he should let all the cats out of the bag. He'd unite pairs of lovers, but he'd lose Kay. Meanwhile, Harry decides that a swift end to Pat's life would be more kind than divorcing her. He buys poison. Murder will out?

Where to watch Married Life