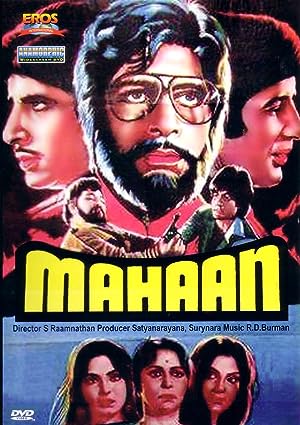 How to Watch Mahaan 1983 Online in Australia

The cast of Mahaan

What is Mahaan about?

Criminal Vikram Singh is arrested for possession of drugs thus the case is called up in a court of law which forces him to approach his lawyer friend, Amit but instead of favoring for him Amit gets him prosecuted. Shortly after Vikram gets released from jail framing Amit for the killing of his associate, Rajan. On the advice of his wife, Janaki Amit decides to run far-away to avoid getting arrested by the police. Meanwhile Janaki give birth to twin boys, Shankar and Guru; Shankar grows up to be a police officer but unfortunately Guru gets separated from her and grows up with an elderly couple. Ironically Amit now resides in Nepal where-by he is a well-respected multi-millionaire businessman, Rana Ranveer and has adopted a young girl, Manju who grows up with him. Fortunately the family gets united and plots to bring Vikram to justice.

Where to watch Mahaan