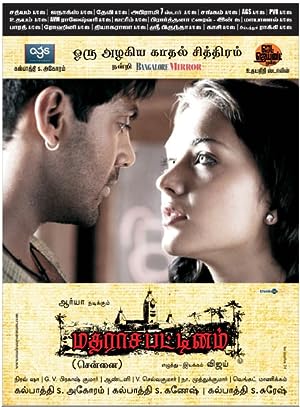 How to Watch Madrasapattinam 2010 Online in Australia

After the death of her husband, Amy Smith, an elderly English woman, decides to return to India to search for her long lost lover and to return a necklace she was given. Through memory flashbacks we see how Amy as a young girl first arrived in Madrasapattinam, India in 1945 to join her father who was the governor of the city. Through some events of fate she meets Paritihi, a young Indian boy. Amy, feeling drawn towards Paritihi and intrigued by Indian culture, asks him to be her guide around the town and to show him the ways of his country. Soon a tender romance develops between them. However, Amy is too be married to officer Robert Ellis, a cruel man appointed by her father, forcing Amy and Paritihi to fight for their love.

Which streaming providers can you watch Madrasapattinam on

Madrasapattinam is a great Drama movie, we’ve selected several other movie options that we think you would like to stream if you have watched Madrasapattinam

Madrasapattinam is a great drama show, we’ve selected several other show options that we think you would like to stream if you have watched Madrasapattinam