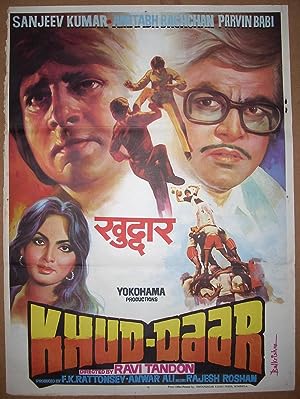 How to Watch Khud-Daar 1982 Online in Australia

Hari R. Srivastav lives a middle-class life in rural India with two step-brothers, Govind and Rajesh. Circumstances compel him to get married to Seema, who dislikes Govind and Rajesh. When Hari goes to Bombay to study law to become a lawyer, she manages to get rid of the two children, who find their way to Bombay, become beggars, then are rescued by a devout Muslim, Rahim, who looks after them like his own children, Farida and Anwar. 20 years later, Hari, Govind and Rajesh are re-united in a Courtroom - where Hari is the Judge; Rajesh is accused of embezzling money from his father-in-law, Verma, and of drug-dealing and smuggling; while Govind, a taxi-driver, prone to physical violence - is accused of killing Verma!!!

Which streaming providers can you watch Khud-Daar on

Here is the comprehensive list of streaming providers that will show Khud-Daar in Australia. If Khud-Daar will appear with other providers further down the line, this table will be updated.

Khud-Daar is a great Action movie, we’ve selected several other movie options that we think you would like to stream if you have watched Khud-Daar

Khud-Daar is a great action show, we’ve selected several other show options that we think you would like to stream if you have watched Khud-Daar