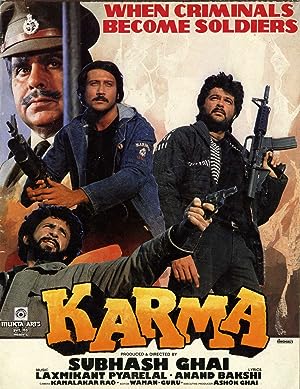 How to Watch Karma 1986 Online in Australia

The cast of Karma

What is Karma about?

The PSO is a British oriented group who wants to take control of India. When senior police inspector Vishwa Pratap Singh arrests there leader Dr. Michael Dang the authorities blast the jail Dang is logged in killing huge numbers of inmates including two of Vishwa's sons and his daughter-in-law; with Dang escaping in the process. Vishwa who now calls himself Dada Thakur is determine to put an end to Dang and his PSO gang which prompts him to recruit three prisoners who are soon to be hang namely Baiju Thakur, Johnny and former terrorist Khairuddin Kisti. Soon Dada Thakur will come to realize that these prisoners are least interested in his mission as they planned their own agenda.

Where to watch Karma