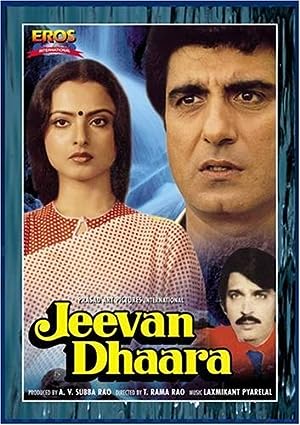 How to Watch Jeevan Dhaara 1982 Online in Australia

The cast of Jeevan Dhaara

What is Jeevan Dhaara about?

An overwhelmed Mr. Shrivastav is unable to shoulder the responsibility of raising and looking her his wife, two daughters, and one son, he leaves home, and decides to be a celibate hermit. The son, Ashok, is an unemployed alcoholic, unable to find employment, and prefers gambling, and living on the earnings of his sister, Sangeeta. His family had hoped that getting him married, would make him responsible, in vain though, and to make matters worse he gets intimate with his wife frequently, which results in her giving birth to children, who all add to the financial burden of this household. Geeta is the second daughter, who is widowed, and is now living with her family. Sangeeta is the only one employed, and carrying the responsibility of this family on her shoulders. When her father returns home, she hopes to resign from her job, and marry her sweetheart, Prem, but alas, the father again leaves them, and Sangeeta returns to her employment. Complications arise when Geeta falls in love with Prem, and Sangeeta decides to get them married. The family rent out a room to a struggling and unemployed young man by the name of Anand Bhatnagar, who is unable to pay any rent, and is secretly in love with Sangeeta. When Anand rescues Kalpana from killing herself, Sangeeta arranges their marriage. Unable to offend Sangeeta, Anand agrees to marry Kalpana. Things turn around for Sangeeta when Ashok finally quits drinking and gets a job as a waiter, and her boss, Kanwal, proposes marriage to her. Sangeeta is all set to resign from her job, get married, and live a comfortable life, not knowing that fate has something else in store for her.

Where to watch Jeevan Dhaara