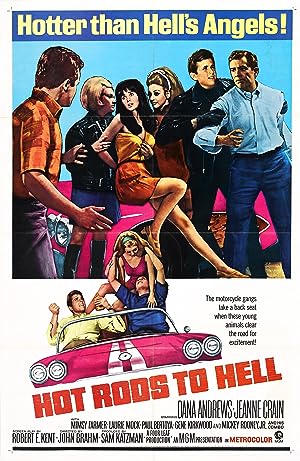 How to Watch Hot Rods to Hell 1966 Online in Australia

Where to watch Hot Rods to Hell

What is Hot Rods to Hell about?

While on a business trip just before Christmas, Tom Phillips gets into a car accident, which was caused by the reckless driving of the other car involved. Although Tom suffered no paralysis from his back injury, he did come out of the accident with a chronic back problem which results in him not being able to continue with his current work, and a mental block having anything to do with the accident, including Christmas music, driving in general and the sounds of screeching tires and breaking glass. The Phillips - Tom, his wife Peg, and their two children, teenager Tina and pre-teen Jamie - end up moving from their Boston home and buying a motel in Mayville in the California desert. Tom would be physically able to do the work required running a motel, and the dry heat is good for his back. But as they approach Mayville, they encounter a bunch of reckless hot rodders named Duke, Ernie and Gloria. Since Tom scolds them about their reckless behavior, they decide to make the Phillips' lives miserable by terrorizing them using their souped up vehicle. They also end up finding out where the Phillips' ultimate destination is. But as their string of altercations comes to a head, the process which includes Tina's teen-aged infatuation with Duke, the Phillips have to figure out how best to protect themselves, Tom who knows they can't outrun the souped up hot rod, or out "chicken" the crazed Duke.

Which streaming providers can you watch Hot Rods to Hell on

The cast of Hot Rods to Hell