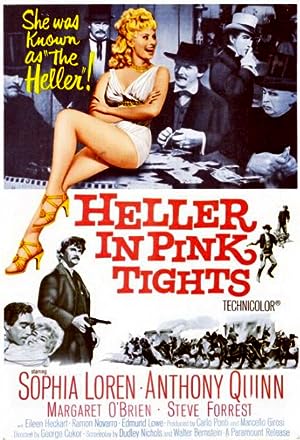 How to Watch Heller in Pink Tights 1960 Online in Australia

The cast of Heller in Pink Tights

What is Heller in Pink Tights about?

Nineteenth century Wyoming: the wild West. Mild-mannered Tom Healy has a two-wagon theater troupe hounded by creditors because Angela, his leading lady and the object of his affection, constantly buys clothes. In Cheyenne, they meet with applause, so they hope to stay awhile: the theater owner likes Angela, and she keeps him on a string. She's also the object of the attentions of Mabry, a gunslinger who's owed money by the richest man in Bonanza. Complications arise and the troupe heads for Bonanza, through hostile Indian territory. Is the troupe doomed to a peripatetic life, is Mabry in danger, and does Tom stand a chance with Angela, a hellion in pink tights?

Where to watch Heller in Pink Tights