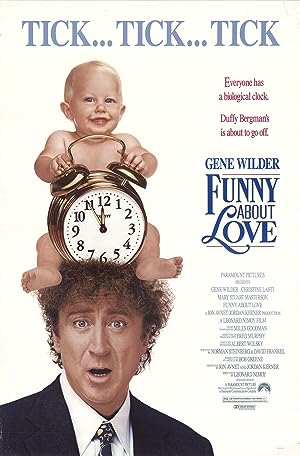 How to Watch Funny About Love 1990 Online in Australia

The cast of Funny About Love

What is Funny About Love about?

When Duffy Bergman, a New York cartoonist, meets Meg Lloyd, a gourmet chef, he discovers the love of his life and they marry -- yet love alone isn't enough to make them happy. Meg decides she wants to have a baby, a goal that initially makes Duffy frantic, but soon becomes his most important desire as well. When they are unable to have a baby, Meg begins concentrating on her career and the two slowly drift apart -- eventually separating. Later, when Duffy is speaking at a convention of the Delta Gamma sorority, he reveals that the Delta Gamma girls have always been his dream girls -- his Love Goddesses. There he meets the young and uninhibited Delta Gamma girl, Daphne Delillo. When Daphne moves to New York to work as a network sports reporter, their mutual attraction and Daphne's spontaneity spark an adventurous new relationship for Duffy. Now Duffy must decide which is more valuable to him -- the relationship he has given up, or the relationship he has always dreamed of having.

Where to watch Funny About Love