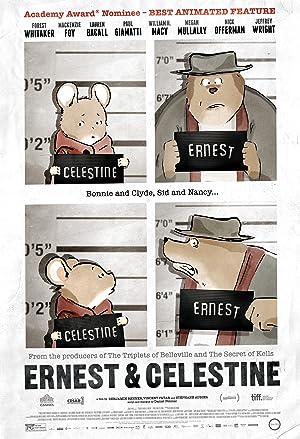 How to Watch Ernest & Celestine 2012 Online in Australia

What is Ernest & Celestine about?

There is a world where the Bears live above ground in their cities and the rodents live below in their underground ones in mutual fear and hate. However, Celestine, an apprentice mouse dentist, finds at least momentary common cause with Ernest, a poor street Bear musician, that gets them rejected from both their respective worlds. In spite of this misfortune, the exiles find a growing friendship between themselves as their respective talents flower because of it. Despite this, their quietly profound challenge to the founding prejudices of their worlds cannot be ignored as the authorities track them down. When that happens, Ernest and Celestine must stand up for their love in the face of such bigotry and achieve the impossible.

Where to watch Ernest & Celestine

Which streaming providers can you watch Ernest & Celestine on

The cast of Ernest & Celestine