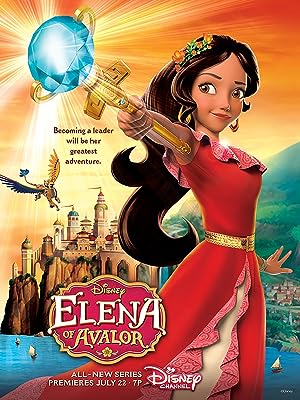 How to Watch Elena of Avalor Online in Australia

What is Elena of Avalor about?

Teenage princess Elena has saved her magical kingdom, Avalor, from an evil sorceress and must now learn to rule as its crown princess. Elena's adventures will lead her to understand that her new role requires thoughtfulness, resilience and compassion, the traits of all truly great leaders. Since she is only 16 years old, she has a Grand Council comprised of her grandparents, older cousin Chancellor Esteban and a new friend, Naomi, to give advice along the way. Elena also looks to her younger sister Isabel, her friends Mateo and Gabe, and a trio of magical flying creatures called jaquins for guidance and support.

Where to watch Elena of Avalor

Which streaming providers can you watch Elena of Avalor on

The cast of Elena of Avalor

Elena of Avalor is a great Action movie, we’ve selected several other movie options that we think you would like to stream if you have watched Elena of Avalor

Elena of Avalor is a great action show, we’ve selected several other show options that we think you would like to stream if you have watched Elena of Avalor