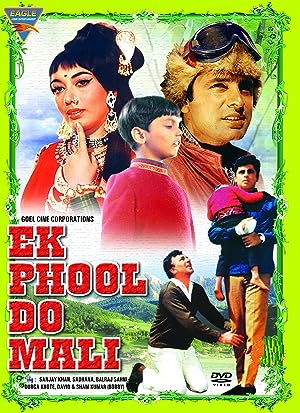 How to Watch Ek Phool Do Mali 1969 Online in Australia

The cast of Ek Phool Do Mali

What is Ek Phool Do Mali about?

Somna lives a poor lifestyle with her widowed mom, Leela, in the mountainous region of India and Nepal. She makes a living working on the apple farm of wealthy widower, Kailash Nath Kaushal, who also runs a mountaineering school, and has Amar Kumar as one of his students. Somna and Amar meet, fall in love, decide to get married with Amar's parents' and Leela's approval, with the marriage to take place shortly after Amar returns from a climbing expedition. A few days later, following an avalanche, they get the news that Amar and the other climbers have been killed. A devastated Somna is molested by Shamsher Singh, and Kailash comes to her rescue, he also offers to marry her when he finds out that she is pregnant. The marriage takes place, Somna gives birth to a boy, Bobby, while Shamsher is arrested and sent to jail for 6 years. Kailash, who is unable to have children after an accident, is thrilled to be a father, adores and is virtually inseparable from Bobby. Five years later, Somna and Kailash, while celebrating Bobby's 6th birthday, get a shock when Amar shows up at the party. Watch the impact Amar's presence has on Kailash, Somna, Leela, and Bobby.

Where to watch Ek Phool Do Mali