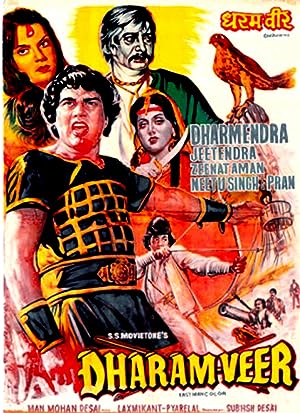 How to Watch Dharam Veer 1977 Online in Australia

The cast of Dharam Veer

What is Dharam Veer about?

The story revolves around two small kingdoms in British India. Court intrigue, murder, assassination, Royal excesses, injustice to the subjects were hallmarks of the time and find their way into the story. Princess Minakshi of one of the kingdoms hunts tigers and falls in love with warrior hunter Jwala Singh who saves her life. Jwala Singh disappears when out hunting tiger and the stage is set for the drama. The king is not aware that Minakshi married her lover, so Minakshi finds herself the Queen of a neighbouring kingdom while pregnant by Jwala Singh. Court intrigue separates one of the twin boys that she delivers. Grown up, the boys become close friends - the prince (Veer) and the ironsmith(Dharam}. One falls in love with a princess while the other with a seafaring gypsy. How Dharam wins the heart of a haughty princess and how Veer succumbs to the charm and determination of a gypsy girl is a good part of the story. The mastermind of the palace intrigue, Sujan Singh brings together a group of like minded people to help him stage a coup. Dharam Veer was the highest grossing film at the box office, in its day.

Where to watch Dharam Veer