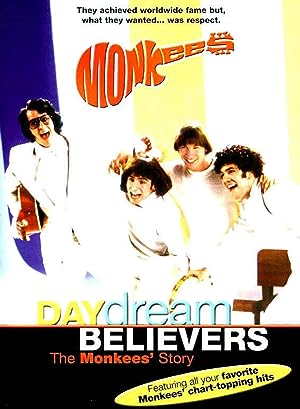 How to Watch Daydream Believers: The Monkees' Story 2000 Online in Australia

The cast of Daydream Believers: The Monkees' Story

What is Daydream Believers: The Monkees' Story about?

In 1966, producers Bert Schneider and Bob Rafaelson come up with the idea of creating a TV show that would feature the American answer to the Beatles, The Monkees. Eventually, four young men are chosen for the roles, Mickey Dolenz the former child TV star, the stage actor Davey Jones and the musicians, Mike Nesmith and Peter Tork. With the aid of a successful music producer and able TV promotion, the Monkees become a sensation. However, that success is tainted, to the chagrin of the band, as they find themselves labeled as talentless phonies. This film covers the band's frustrating struggle to prove their detractors wrong as they struggle to earn some artist legitimacy. Whether it's by learning to excel as a band or experimenting with wild ideas for their show and film, Head, nothing seems to work. Meanwhile the band have their internal tensions as various members struggle to decide what is really important to them, simple material success, or having real artistic respect for their work?

Where to watch Daydream Believers: The Monkees' Story