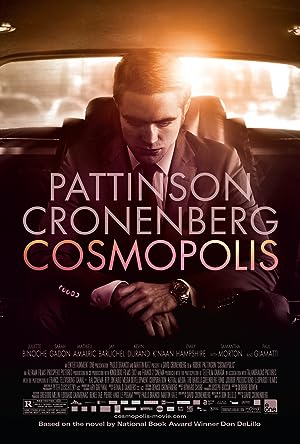 How to Watch Cosmopolis 2012 Online in Australia

The cast of Cosmopolis

What is Cosmopolis about?

On the spur of the moment, twenty-eight year old Manhattan self-made multi-billionaire Eric Packer decides he wants to get a haircut from his regular and longtime barber across town, a difficult journey today if only because of the traffic gridlock from three high profile but vastly different events taking place in the borough, including a wandering anarchist protest, they who largely use dead rats as their symbol of protest. Through his trek, Eric, most taking place in his stretch limousine, meets with several business associates - some with as esoteric job titles as Head of Theory - and personal acquaintances, including his several week bride, Elise, a wealthy woman in her own right with who he still has a somewhat distant relationship if only because they don't really know each other. The start of Eric's day ends much differently than the end as his personal fortune largely hinges on external forces in relation to a speculative currency transaction, and as he learns that someone is trying to kill him, who and for what reason he does not know.

Where to watch Cosmopolis