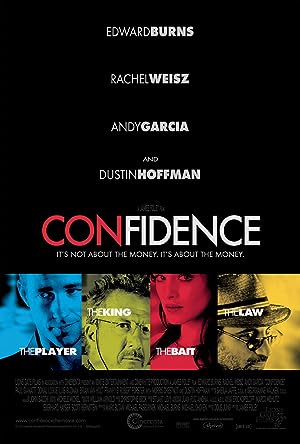 How to Watch Confidence 2003 Online in Australia

The cast of Confidence

What is Confidence about?

Jake Vig leads a small Los Angeles based team of grifters, each member who has his specific role in each con: Jake is the main man, Miles the adversary, Big Al the scared innocent bystander, and Gordo the dead shooting victim. He also has in his pockets crooked LAPD detectives Lloyd Whitworth and Omar Manzano who basically play themselves as needed. Beyond getting the money, the basic goal of each con is to ensure the mark is so scared by what has happened - usually being an accomplice in a "murder" - that he won't come back looking for the money. Jake learns the hard way that their latest mark, Louis Dolby, who they fleeced for $150,000, was carrying money for a criminal named King, who takes a no prisoners approach in getting even, he who knows who stole his money. Instead of returning the $150,000 to King, money which he no longer has anyway, Jake convinces King to parlay that money and a bit more into a bigger con against a mark of King's choice, that person being banker Morgan Price, a second generation mobster. The total take for this con is to be $5 million. Beyond co-opting a couple of inside people for this con, King wants one of his own men inserted - Lupus - and Jake also enlists the work of a female pickpocket he recently ran across named Lily, to who he is attracted. During the process, a small wrinkle occurs when they learn that Special Agent Gunther Butan with the US Customs Agency, an old adversary of Jake's, is currently after him, which means they either have to call off the international mission or watch more carefully their movements, with Jake not to be the one to carry any money across the border. But with a group of con artists working for the first time with new players, a question becomes are there any inside cons at play, especially in this case where Jake has more of a personal stake than usual.

Where to watch Confidence