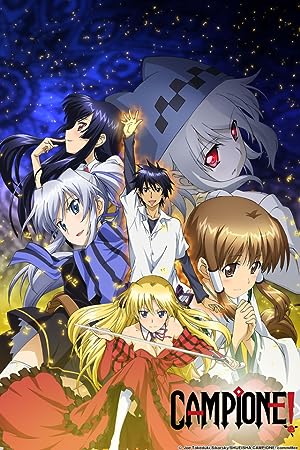 How to Watch Campione! Online in Australia

What is Campione! about?

Some people find religion, but for 16-year-old Godou Kusanagi, it's religion that's found him! As the result of defeating the God of War in mortal combat, Godou received the position of Campione, or God Slayer, whose duty is to fight Heretical Gods whenever and wherever they appear and start changing things to suit themselves, usually at the expense of the people in the area. Not only is this likely to make Godou begin his recognition in Heaven, it's also a job that comes along with a lot of other problems. One of the problems would be to deal with the fact that his enhanced status keeps attracting attention and difficult girls. In particular, the demonically manipulative sword-mistress Erica Blandelli, who strongly and extremely forwardly expresses her love for him, which usually creates awkward and misunderstood situations for him. (Campione is the Italian word for Champion. Everyone calls God Slayers Campione as the earliest known record describing the Campione was written by an Italian, hence the Italian form is used by everybody regardless of nationality.)

Where to watch Campione!

Which streaming providers can you watch Campione! on

Here is the comprehensive list of streaming providers that will show Campione! in Australia. If Campione! will appear with other providers further down the line, this table will be updated.

The cast of Campione!

Campione! is a great Action movie, we’ve selected several other movie options that we think you would like to stream if you have watched Campione!

Campione! is a great action show, we’ve selected several other show options that we think you would like to stream if you have watched Campione!